The English Department at Widener University

Happy End of the Semester: Looking Back, Looking Forward

It has been our pleasure to keep the Widener English blog for quite a few years to share and to celebrate the work of our students and faculty.  We’ll be taking some time in the spring to reboot and redesign a brand-new site for Widener English and Creative Writing—an exciting online space that will reflect our mission, vision, and plans for the future.

Before we go, take a look at some of the incredible things that happened for us this past fall!

Nicole Cirone works with Rohan Suriyage at the alumni/student workshop

Alums and students gather in the Writing Center 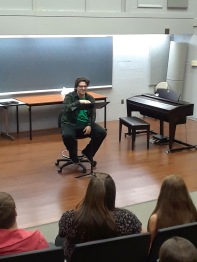 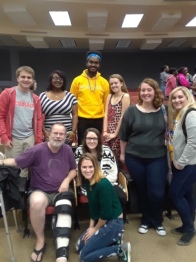 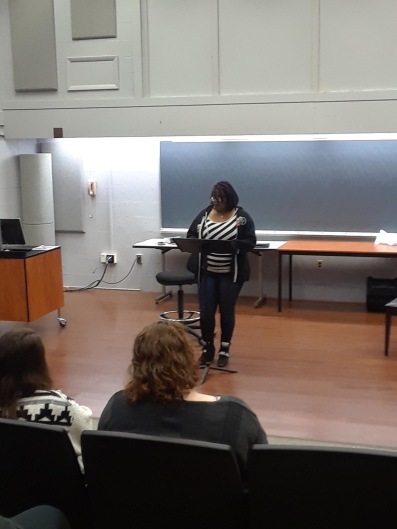 We wish everyone a happy end of the semester and a restful break—and we look forward to seeing you in the spring! 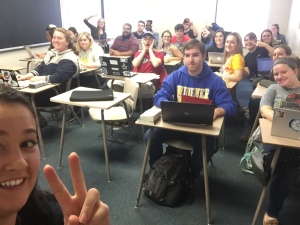 On October 26, Flannery O’Connor scholar Daniel Moran spoke at Widener on the subject of his book, Creating Flannery O’Connor.  His lively and engaging talk offered a tour of his monograph, looking at how reviewers, editors—even obituary writers, pop-culture mavens, and GoodReads users—have shaped our perception of this essential American writer.  Writer of the South?  Woman writer?  Catholic writer?  All of the above? 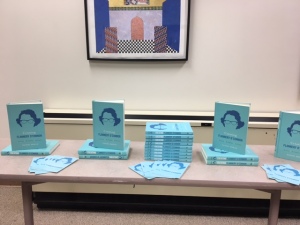 O’Connor is many things to many people and difficult to pin down.  She resists the attempts of critics and common readers to understand her work and her beliefs in any kind of a monolithic way.  Moran’s take on reception theory and practice, as well as his modesty and humor as a reader of O’Connor, show us new ways of grappling with this complex figure.

Moran teaches history at Monmouth University. His work on G. K. Chesterton and John Ford has been published in academic journals and he has contributed articles to a variety of teaching guides, including Poetry for Students, Short Stories for Students, and Drama for Students. His most recent study, Creating Flannery O’Connor: Her Critics, Her Editors, Her Readers (University of Georgia Press, 2016), examines how a literary reputation—and the image of a cultural icon—have been made, not only by O’Connor herself, but also by her readers, reviewers, critics, publishers, and filmmakers.

He was brought to Widener and introduced by Professor Mark Graybill, our specialist in Flannery O’Connor who is currently teaching a course on Southern literature.

At the annual faculty awards ceremony last night, 26 October, our esteemed department chair, Dr. Janine Utell, was named Distinguished University Professor for the College of Arts and Sciences. This distinction, among the highest at Widener University, recognizes full professors who demonstrate superlative achievement in teaching, scholarship, and leadership. The college awards the professorship every three years to two distinguished faculty members: along with the college’s other award-winner, Dr. Lori Simons, Psychology, Dr. Utell will serve a three-year term as Distinguished University Professor. In 2014 Dr. Utell earned the university’s most prestigious recognition–the Lindback Foundation Award for Distinguished Teaching.

We are so proud of our amazing department chair, consider ourselves fortunate to have her, and believe she deserves to win all of the awards!

[This post will be updated when photos from the event are available.]

We are delighted to link out to the blog at The Blue Route, Widener’s national undergraduate literary magazine, to share a post about Ken Pobo’s recent reading from his new book Loplop in a Red City.  The reading from Dr. Pobo’s collection of ekphrastic poems inspired by surrealist painting was performed to a standing-room-only crowd at the Widener University Art Gallery.

As author Nicole Gray so eloquently put it, “When one person has such a passion for art, it can become contagious and that is what happened that day at the reading.”  Read the rest of the post here!

And while we’re at it…congratulations to Dr. Pobo for being recognized this fall for thirty years of teaching at Widener!

Shakespeare at the Free Library!

Annalisa Castaldo, our specialist in medieval and Renaissance literature, is also the Scholar-in-Residence for the Philadelphia Shakespeare Theatre.  This year she is giving a series of

lectures called “Shakespeare in the World,” on Shakespeare’s “Taboo Topics”: politics, sex, race, and religion.  All lectures are held from 6–7pm at the Free Library of Philadelphia on Vine Street (the Parkway Central Library).  Check them out!  (Link here.)

On Monday, April 17th, Dr. Daniel Robinson delivered the Spring President’s Lecture, “What is a Romantic Poet Anyway?:  Editing the Romantics.”  This lecture was open to the entire university community.

The Spring President’s Lecture is for the winner of the Faculty Award for Outstanding Researcher from the previous semester. This award is a University-wide award given to a faculty member, after a lengthy and rigorous peer review process, who demonstrates excellence in research and scholarship in their field, particularly if that work involves student research and scholarship.  This past Fall Dr. Robinson won this award.

Dr. Robinson devoted some of the lecture to orienting the audience to aspects of English literature about which they might not be familiar, which in this case regarded the Romantic period.  He also discussed the theory and methodology of textual scholarship, with a particular focus on Mary and Percy Bysshe Shelley.  He says,

The Romantic Period is unique in literary history in that its parameters traditionally have been established by the lives, careers—indeed, the personalities—of six writers, all men, all English, all poets. For much of the twentieth century, academic study of British literature of the late eighteenth and early nineteenth centuries has centered on two generations: the first generation—Blake, Wordsworth, Coleridge—who lived too long, and the second generation—Byron, Shelley, Keats—who died too soon. Feminist literary studies of the 1970s and ’80s would challenge the masculine monoliths; by the end of the century Romanticists were involved in a massive recovery of writers very different from the so-called Big Six: women writers, working-class writers, and writers who lived beyond the borders of England and who wrote beyond the borders of poetry. However, now that the dust has settled, the evidence suggests that, while scholars, instructors, students of Romanticism know about many more writers than the Big Six, Blake, Wordsworth, Coleridge, Byron, Shelley, and Keats continue to be the most studied, most read, most beloved writers of the period. In this lecture, I will discuss the challenges, questions, and issues involved in my preparation of the first wholly new anthology of Romantic poetry to be produced taking into account this new landscape. I also will discuss the ways I have involved my students in conducting the textual research and in making the editorial decisions that will result in the publication of The Bloomsbury Anthology of Romantic Poetry next year.

Dr. Robinson is Homer C. Nearing Jr. Distinguished Professor of English; at Widener University he teaches courses on British Romanticism, poetry and poetic form, Milton, and the rise of the British novel. He also recently created a certificate in Textual Scholarship—the only such program for undergraduates in the country—during the completion of which students work on scholarly editions of literary works for publication. Dr. Robinson is co-editor of A Century of Sonnets: The Romantic-Era Revival, 1750–1850 (Oxford UP, 1999); Lyrical Ballads and Related Writings (Houghton Mifflin, 2001); and, most recently, The Oxford Handbook of William Wordsworth (Oxford UP, 2015). He is the textual editor of Poems, The Works of Mary Robinson (2 vols, Pickering and Chatto, 2009) and author of Myself and Some Other Being: Wordsworth and the Life Writing (U of Iowa P, 2014), William Wordsworth’s Poetry: A Reader’s Guide (Bloomsbury, 2010) and The Poetry of Mary Robinson: Form and Fame (Palgrave Macmillan, 2011). He also is series editor for Engagements with Literature (Routledge) and Bloomsbury Editions (Bloomsbury). He is currently working on The Bloomsbury Anthology of Romantic Poetry, a new edition of Mary Shelley’s Frankenstein, and an innovative edition of Wordsworth and Coleridge—all of which involve the work of his Textual Scholarship students.

UPDATED TO ADD: Read a brilliant review of another of Professor Pobo’s forthcoming titles, Loplop in a Red City, a collection of ekphrastic poems, here. 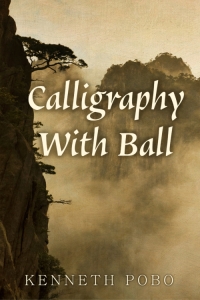 Congratulations, Professor Pobo!  Here’s a sample (and you can buy a copy here):

LI BEI ON A TANNING BED

I dash back the long path
over 700 years. Would Botox
hide how dead I look? Your world

is crummier than mine despite
Emperors who kept me hopping.
Tu Fu told me he visited last year.
When you arrive, try
the tanning salon. It’s strange.

He’s never steered me wrong—
while in the bed I remember a night
I spent alone on a mountain
with the moon. Or
was I on the moon dreaming

of a mountain? I’m pretty
sure I was crocked and
in love. With everything from
a grass blade to a ripple.
Not many open areas here—

mostly drug stores, fast food
joints, and parking lots.
This tan will surprise
the ghosts back in China.
I’ll send you a poem. By

the time you get it, you’ll
be dead too. No problem.
Poems travel forever. 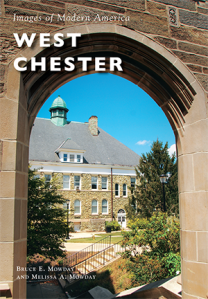 author, Melissa Mowday.  West Chester, in Arcadia Publishing‘s Images of Modern America series, is a photographic tour of this historic town; Mowday co-authored the book with her father, Bruce Mowday.

Melissa will be signing books at the Devon Barnes & Noble on December 18th at noon—stop by and congratulate her!

The subject of this year’s Senior Seminar, directed by Professor Janine Utell, is James Joyce’s masterpiece Ulysses. In accordance with our tradition, Professor Utell, on September 29, presented the annual Fall Faculty Lecture on “James Joyce and Divorce Law,” which is related to her essay “Criminal Conversation: Marriage, Adultery, and the Law in Joyce’s Work,” forthcoming in an edited collection on James Joyce and the law later this year from University of Florida Press. Professor Utell’s lecture addressed late 19th- and early 20th-century adultery laws in relation to not only Joyce’s Ulysses but also his posthumously published Giacomo Joyce and his story “A Painful Case,” from Dubliners.

On October 14, the seniors had the opportunity to visit the Rosenbach Museum and Library in Philadelphia, where they viewed pages from Joyce’s manuscript of Ulysses, issues of the serial publication and a first edition. Librarian Elizabeth Fuller discussed with the students the composition and publication history of Ulysses and provided some anecdotes about the Rosenbach brothers who founded the institution. Professor Utell has a longstanding relationship with the Rosenbach, having coordinated the annual Bloomsday event from 2005 to 2007.

Howell is also working on a dissertation about modernist fiction, early ecology and vitalist philosophy, which features a chapter on Joyce developed from material presented at three James Joyce conferences. He currently teaches in the Department of Writing Arts at Rowan University and leads a reading group on Ulysses at the Rosenbach. His course at Temple University on climate fiction, or “cli-fi,” has been featured in The New York Times, The Atlantic and The Chronicle of Higher Education.

The Nov. 2 lecture by Howell will take place in Room A of the University Center from 4 p.m. to 5 p.m. All are welcome.